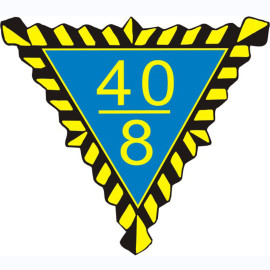 I offer a little 40 & 8 history along with some personal impressions from my time in the organization.

La Societé des Quarante Hommes et Huit Chevaux ( The Society of 40 Men and 8 Horses) or more commonly referred to as the 40 & 8 was established in 1920 as an organization within the American Legion. The French Box Car used to transport troops to the front in WWI was chosen as its’ symbol and the offices/titles and terminology are based on the organization of the French railroad. The Box Car was marked with the 40/8 emblem indicating a capacity for 40 men or 8 horses. In 1959, the 40 & 8 became a separate organization.

The Chef de Gare compares to the Post Commander, Chef de Train to the First Vice Commander, Correspondant to the Post Adjutant, Commissaire Intendant to the Finance Officer and so on for an equivalent structure, but using French titles. The Cheminot is our Executive Board.

The programs are similar to those of the American Legion; however the 40 & 8 added Nurses Training for which we provide scholarship money when we can. Locale 240 has presented many at NDSU over the years. Another area currently unique to the 40 & 8 is support for research of Hanson’s disease or Leprosy. The 40 & 8 Flags for 1st Graders program visited over 30 area schools giving a program on flag etiquette, flag care and presenting flags to students, distributing over 1900 flags. The 40 & 8 also conducts BINGO at the Fargo VA hospital; visiting with the patients, providing them with coffee, cookies and juice and giving away $50 in prize money each night. The 40 & 8 has been described as the fun organization as opposed to the American Legion’s serious nature. Rather than fun, enjoyable is probably more appropriate. The tasks and obligations are taken very seriously, but accomplished in an enjoyable, fun-loving way. The 40 & 8 has a place for the clowns and jokesters.

Membership is by nomination by a current member and a vote by the local unit or Voiture Locale. A Grand Voiture or Grand officers are at the state level. The local level is more like county-wide. Our Locale 240 is primarily Cass County but does extend beyond to cover an area more like the North Dakota Legion’s First District. The membership used to be drawn exclusively from the American Legion membership, but has now been opened up to other veterans. 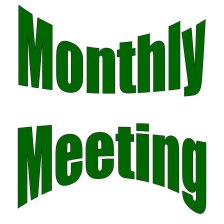 Just a reminder of the December Post Meeting taking place on December 6th at 7:00 p.m. in the basement meeting room of the VFW (202 Broadway North) in downtown Fargo.
We hope to see you there! 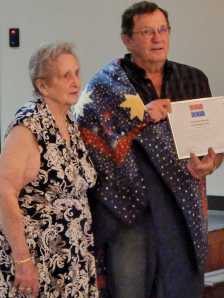 Congratulations to Post 2 member Dennis Schwind as he received a quilt from the Quilts of Valor Foundation.  The quilt was presented to him on Monday, August 15th at the West Fargo VFW.
Dennis was honored for his service in the Army which took him to Ft. Lewis, WA, Ft. Bragg, NC, and Vietnam.
Also in attendance was his son, Eddie Schwind, daughter-in-law, Jennifer Schwind, and friend, Christopher Hanson, all longtime Post 2 members.
Congratulations to Dennis! 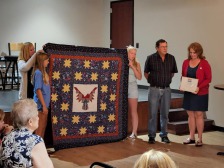 A six-state pilot program to evaluate risk among schools that accept GI Bill education beneficiaries has “demonstrated that the bipartisan action taken to protect students and taxpayers can and does work,” according to a new report from EducationCounsel, LLC, the National Association of State Approving Agencies and The American Legion. 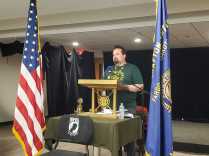 Thanks to Chris Deery of the Cass County Veterans Services Office for stopping in at our February Post Meeting to bring us up to date on the latest and greatest in veterans benefits! 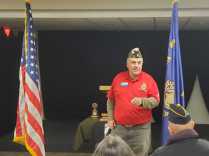 Thanks to District 1 Commander Dennis Kubischta for visiting with us at our December Post Meeting on December 7th! 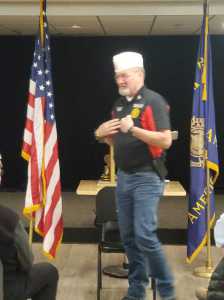 Guest Speakers and Special Guests at the November Post Meeting

Thanks to Department Commander Steve Anderson for taking time out of his busy schedule to visit us at our November Post Meeting! 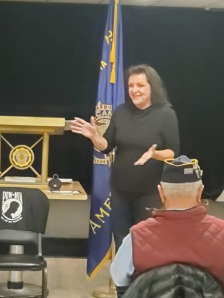 Thanks also to our guest speakers who shared their time with us at our November Post Meeting!  Diana Hall (above), the Homeless Program Manager for the VA's Community Resource and Referral Center and Jennifer Lieder (below), the Cemetery Manager for the Fargo National Cemetery shared a lot of great information with us tonight! 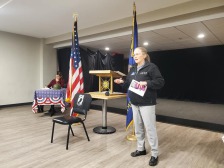 A Salute to Our Afghanistan Veterans
CLICK HERE to read a special salute to our Afghanistan veterans by National Commander James W. “Bill” Oxford.

Memorial Service at Lindenwood Park
During Navy Week, which took place July 19-25, the Commanding Officer of the USS North Dakota, Cmdr. Robert Edmonson III, along with his wife, Melissa, and the Chief and two enlisted Sailors from the submarine crew participated in a memorial service at Lindenwood Park in Fargo. The Post 2 Color Guard also participated as they conducted honors along with taps.
The Chaplain from Navy Operational Support Center Fargo provided the prayer.
It was an honor for the Navy & Post 2 to provide these honors. 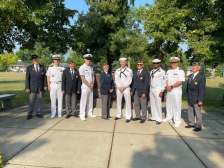 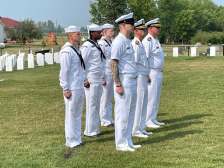 Memorial Service at Fargo National Cemetery
It was an honor to have Cmdr. Robert Edmonson III, Commander of the USS North Dakota, along with Navy personnel from the USS North Dakota and Navy Operational Support Center Fargo as a part of a Memorial Service at the Fargo National Cemetery last month.
Military Honors were conducted by the Fargo Memorial Honor Guard on a beautiful summer day.
Several members from Post 2 are also members of the Fargo Memorial Honor Guard.

How to Help Afghan Allies

The American Legion is in search of veterans looking to help resettled Afghans with Special Immigrant Visas (SIV) and refugees.  Many of these Afghans assisted American forces in Afghanistan as interpreters during the Global War on Terrorism.

CLICK HERE to read a message from National Commander James W. "Bill" Oxford regarding the 100 Miles for Hope.

The American Legion has expanded the ways in which participants in the second annual 100 Miles for Hope can support disabled veterans and military families in need.  CLICK HERE to learn more!

American Legion Herman Kent Post 777 in Jamestown, NY already had a strong relationship with the VA Western New York Healthcare System (VAWNYHS) prior to the coronavirus pandemic.  But both entities recently expanded that relationship in an effort to get as many COVID-19 vaccines out to area veterans. 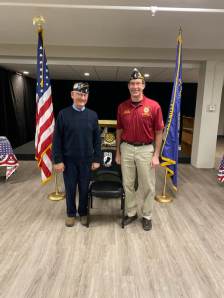 Thank you to District 1 Commander Ben Bush of Harwood for stopping by our Post Meeting in March!  We appreciate your time and are glad to have you as our leader of our area district!

Be a part of the 2021 100 Miles for Hope to raise funds and awareness for the American Legion Veterans & Children Foundation (V&CF).  CLICK HERE to learn more about how you can participate!

What to know about the virtual Washington Conference

This year’s American Legion Washington Conference will be virtual, due to safety concerns regarding the ongoing pandemic.  However, the conference, which is from March 1 to 4, has a packed agenda and technology allows Legionnaires to participate from wherever they may be.

As an influx of veterans are seeking the COVID-19 vaccine as it becomes available at Department of Veterans Affairs (VA) hospitals, many want clarity on when and where they will be able to get their vaccines.  CLICK HERE to read more.

‘We Must End This Uncivil War,’ President Biden Says

Just before noon on January 20th, Joe Biden took the oath of office of as the 46th President and Commander-in-Chief of the United States.  CLICK HERE to read more.

The VA is working hard to get COVID-19 vaccines to Veterans as quickly and safely as possible.  CLICK HERE to sign up and help them understand your interest in getting a vaccine when one is available to you.  They’ll send you updates on how they’re providing vaccines across the country - and when you can get your vaccine if you want one.

Suicide is a very serious subject with our veterans and our currently serving service members. Please take some time to learn how to recognize when veterans are in distress and how to react and help if they are in trouble.
Here are some helpful web links to help you learn more:
Fargo VA Suicide Prevention Program Website
Department of Veterans Affairs Veteran Suicide Prevention Website
The Veterans Crisis Hotline is available 24 hours a day to those who are in need of help. Dial 800-273-8255, then select 1.
For more information, please contact Fargo VA Suicide Prevention Education and Outreach Specialist Nicole Veselka, BSN, RN at (701) 239-3700, ext. 3370. 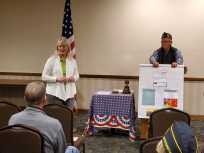 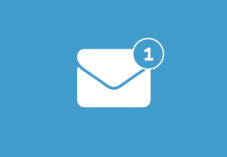 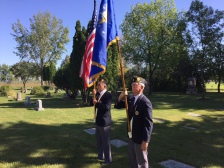 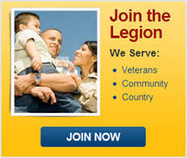